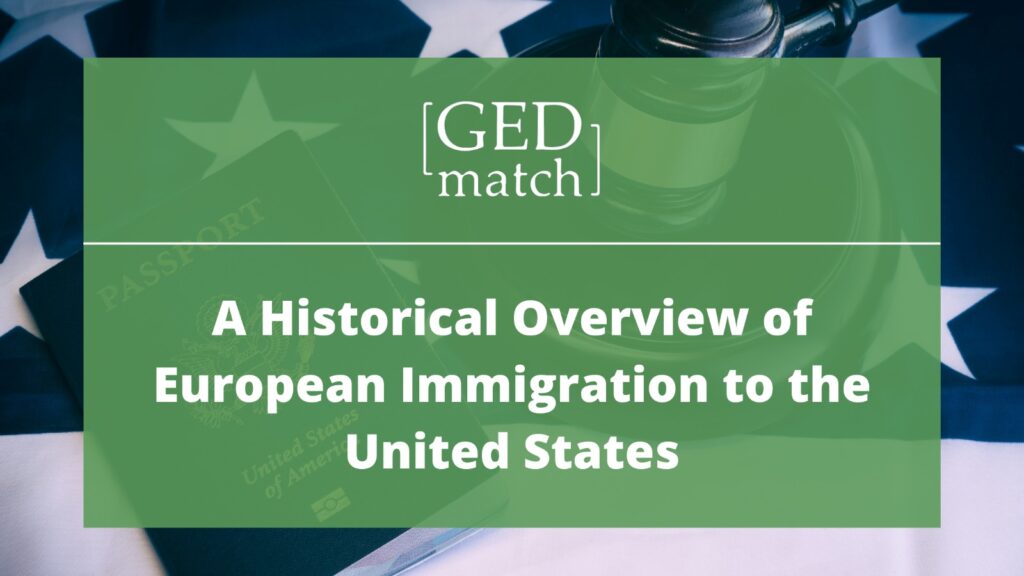 Settlers from England started coming to the United States back in the colonial era, motivated by employment and land ownership. Most of the immigrants were from England, Ireland and Germany but among the many, there were Europeans from Italy, Poland, Scandinavia and Russia.  The first Europeans to establish a permanent colony in the territory that would embrace the arrived in the region of present-day Virginia in 1607. In honour of their king, James I of England, the early settlers began building their colony 30 miles inland from the mouth of the river – Jamestown, Virginia.

When they first arrived, things were very tough for the new colonists. They had hoped to find gold and silver, as Spanish colonists had in Central and South America, as well as large groups of native people who they could easily conquer. However, what they found instead was neither valuable minerals nor an easy route to Asia. Additionally, while the native inhabitants were willing to trade with them, they resisted any attempts at subjugation. Since 1620, English travelers have been colonizing America in order to create settlements that resemble England as much as possible in terms of demographics and economic activity. The first settlers in the New England colonies were the Pilgrims, arriving at Plymouth in 1620 on the coast of present-day Massachusetts southeast of Boston. By the 1640s, more than 20,000 people had migrated to Massachusetts, Connecticut, Rhode Island, and New Hampshire.

Colonists were not attracted to Virginia because of its harsh regimes and often lacked the skills and knowledge that would have been necessary to help them thrive. Not only did they find little value in Virginia, but they also struggled to even feed themselves—resulting in high numbers of death due to disease, unsanitary conditions, and malnutrition. In contrast, during this same time period, potential colonists were much more attracted to locations such as the West Indies and Bermuda. The Dutch men that arrived in 1619 with a group of captive Africans foreshadowed the ultimate answer to the labor problem in Virginia. By the end of the century, African slave labor would become the colony’s economic and social foundation.

The last of England’s North American colonies was founded in the 1730s under the guidance of James Oglethorpe. A former army officer, Oglethorpe had devoted himself to helping London’s poor and debt-ridden after leaving the military. His choice of Georgia as a settlement site, named after the new King,  was motivated by the desire to create a defensive buffer for South Carolina against potential enemies such as the Spanish (Florida), French (Louisiana/Mississippi River), and their Indian allies throughout the region.

The Journey to Ellis Island For European Immigrants

The period between 1880 and 1920 is often referred to as the era of mass immigration, as millions of people left Europe for America in search of a better life. During this period, Ellis Island became the premier gateway for immigrants entering the United States, it processed approximately 500,000 people a year. By 1907, that had increased to 1.25 million. The vast majority of those processed were from Europe, with Germany, Italy, and the Russian Empire accounting for the largest numbers.
The journey to Ellis Island often began with a gruelling ocean voyage lasting anywhere from one to three weeks. Many of the immigrants traveled in steerage, cramped quarters in the lower levels of ships that were often overcrowded and lacked basic amenities. It was during this time that many immigrants faced illnesses, including cholera, typhus, smallpox, and tuberculosis, and some even died en route.

Arriving at Ellis Island was a daunting experience for many of the European immigrants – the process typically lasted about three to five hours. During this time, immigrants had to answer a series of questions about their backgrounds and intentions in the US. This process was intended to identify those who were medically or mentally fit to enter the country.  Once the inspection process was complete, immigrants received a card indicating they had passed their inspections and were cleared for admission into the US. This card symbolized the hope of a new life and a fresh start in the land of opportunity.

The peak period of Ellis Island’s immigration operation ended in 1914 with the outbreak of World War I. From this point onward, immigration numbers began to decline as economic conditions worsened in Europe and the United States entered into a period of isolationism. Nevertheless, Ellis Island remained an important symbol of America’s immigrant heritage and its importance to US history cannot be overstated.

The Great Depression And its Impact on European Immigration

For those immigrants who had already arrived in the US, the Depression created a range of challenges. The high levels of unemployment meant that jobs were difficult to find, leaving many Europeans struggling to make ends meet. This was further compounded by the fact that immigrants were often the first to be laid off when layoffs occurred, due to their lack of English skills and the perceived threat they posed to the employment opportunities of native-born Americans.

During this period, many states implemented stricter immigration policies in an effort to reduce labor competition and protect domestic jobs. The Immigration Act of 1924 limited how many people from each country could come to America. They were based on a census from 1890 that showed what percentage of people in America were from each country. In addition, some states imposed special taxes or educational requirements on those applying for citizenship or residence in order to discourage immigration.

The Great Depression had a profound impact on European immigration to the United States, drastically reducing the number of new arrivals and creating a hostile environment for those already living in the country. Although some European immigration did occur throughout this period, it was significantly reduced until the economy began to recover in the mid-1930s.

European Immigration to the United States After World War II

World War II left much of Europe in ruins. Families were torn apart, homes destroyed, and resources severely depleted. As a result, millions of Europeans fled their homes in search of a better life. Many saw the United States as the ultimate destination for opportunity and prosperity, making it the main destination for European immigrants after the war. Other reasons for Europeans seeking refuge in the US included political and religious persecution. For example, many Jews escaping Nazi Germany sought to build new lives in America. Even after the war ended, countries across Europe were still struggling with oppressive governments, prompting many to seek asylum in the United States.

To help with this humanitarian crisis, the United States developed a policy of immigration that allowed Europeans to come to the United States. The first step in immigrating was obtaining a visa and often times that required sponsorship from an American citizen or organization. Once they had a visa, they had to pass an inspection by the Immigration and Naturalization Service (INS) at an American port of entry. Then they were admitted as legal immigrants and became eligible for green cards. US immigration policies were more lenient during this period, allowing even more people to come and seek a better life.

After being accepted as legal immigrants, many Europeans had to face further hardships such as adjusting to a new culture, learning a new language, and finding employment. Despite the difficulties, many immigrants had a strong desire to make a new life in the United States and persevered.  European immigrants helped build America’s post-war economy, bringing their unique skills and experiences to the US workforce. They also enriched American culture, contributing to arts and music in ways that would not have been possible without their presence.

The experience of being a European immigrant in the United States in the post-World War II era was a mixed one. On one hand, there were many opportunities that did not exist in Europe, including better wages and greater social and economic freedom. On the other hand, many immigrants faced discrimination, both on an institutional level and from other citizens. This was especially true for those who were considered “undesirable” by some native-born Americans.

The influx of European immigrants to the United States following World War II had an immense impact on the country. One of the most significant impacts was the revitalization of urban areas and the development of suburbs. The large number of immigrants coming to the United States resulted in a housing shortage, which prompted the development of new housing developments and the expansion of existing ones. This, in turn, led to economic growth in many areas as businesses set up shops to meet the needs of these new immigrants.

In the 21st century, the United States is becoming a modern melting pot, as immigrants from all over the world continue to arrive in search of the American Dream. One group of newcomers that has made a significant impact on the country is contemporary European immigrants.

The push factors driving European immigration to the United States can be traced back to a combination of economic, political and social pressures that are unique to each country. For instance, in the wake of the 2008 financial crisis, many southern European countries such as Spain, Italy and Greece have seen a surge in unemployment and a decrease in the standard of living that has led to an increase in emigration. Furthermore, the political instability and war in Ukraine and other parts of Eastern Europe have forced many people to seek safety and security outside their home countries. 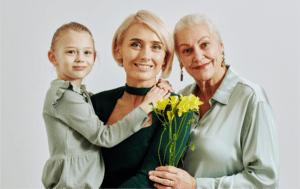 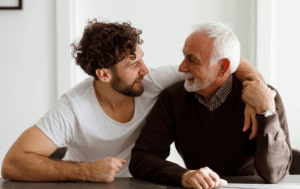 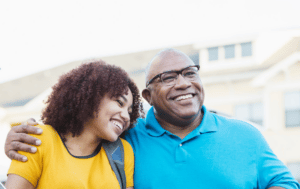 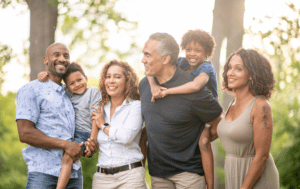 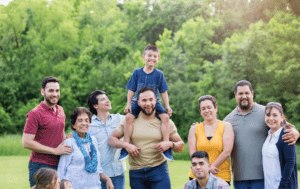 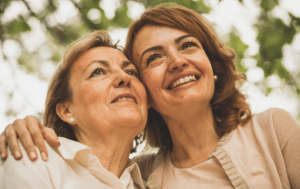